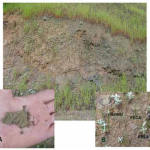 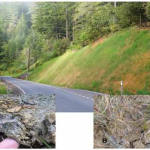 Background The objective of the hydroseeding project at the Agness Illahe site was to reduce first year soil erosion from disturbed cuts and fill slopes while increasing stability for native seed to germinate. A second objective was to evaluate several combinations of hydromulch glue products supplied by Rantec Company. Gene Davis of Rantec Company and Scott Riley, Umatilla National Forest, participated in this project.


Conditions Hydroseeding took place on October 15, 16 and 18, 2003 by Wintun Seeding and Mulching Company. Weather conditions were dry and mild on October 15 and treated slopes dried within 24 hours. On the afternoon of October 16, it began to rain and the slopes shot that morning had only a few hours to dry. Weather on October 18 was warm and dry. The cutslopes shown in the following photographs were 1:1 or steeper slope gradients with very gravelly sandy loam and loam soil textures. Surface soils were dry at the time of shooting.

Findings and Discussion It appears that most of the cutslopes that were hydromulched had good germination and good surface soil stability, thus meeting the objectives of this project. Considering the steepness of the slopes and the high amount of rainfall this site received last winter, meeting the project objectives was an impressive feat.

The Rantec glues (Guardian and Super Tack) are dry products that come in plastic bags. They are easy to use and required less handling than liquid glues shipped in buckets. Compared to another hyrdromulching project, the Chiloquin Highway, which used five, 5-gallon buckets per slurry unit, this project used less than 50 pounds of products per slurry unit. The added advantages to these glues are they can be stored at any temperature (liquid glues must be kept above 40F for best results) and the only waste is the plastic bags (liquid glues result in lots of buckets to dispose). For added strength, “Dirtguard”, a crosslinker, was applied to the slurry.

How these glue products compare to other products on the market is not known. To conduct such comparisons would be expensive as well as difficult to install in the field. Periodic monitoring of completed projects to evaluate the effectiveness of glues and mulches would help our understanding of the products on the market. The monitoring protocol that Scott Riley and I are developing will help answer the questions of plant establishment and soil cover, however I am not sure that what we have developed so far would answer the question of how much soil erosion is being reduced during the plant establishment phase from our application products and methods. The establishment phase is a crucial period since it is a time when much of the soil erosion takes place. In the future we might want to look at using soil erosion monitoring methods developed by soil scientists to evaluate the effectiveness of glues and mulches.

This cut slope was shot on October 18 with a slurry unit composed of 0.5 bags of Super Tack (25 pounds), 6 bales of Ecofiber (300 pounds), 6 bags of Biosol (330 pounds) to 1000 gallons of water.  The seed mix was comprised of seed grown at Stone Nursery from locally collected seed.  The forb species were ERNU (Eriogonum nudum) and ERLA (Eriophyllum lanatum), and grass species FECA (Festuca californica).  A quarter pound of Mycorrhizae (MycoApply Micronized Endo Mycorrhizae from Mycorrhizal Applications) was added to each slurry. The ERLA seedlings are the most obvious seedlings that standout in the picture above but a closer look at inset B reveals that there is a large quantity of Festuca californica seedlings.  Eriogonum nudum germinated at a lesser rate but still can be seen on the site.

The hydromulch and glue appear to still be adding stability to the surface of the soil as the seedlings become established.  Inset A above shows a piece of glued and mulched surface soil that is stable enough to be removed in tact.  Much of the slopes shot with this combination of seed, mulch and glues appear to have this type of germination and growth.

Hydromulch was applied to this road cut on October 18 in two applications. The first slurry application consisted of 6 bags Ecofiber, 6 bags Biosol, 1.5 quarts of Dirtguard, 0.9 bags of Super Tack.  The cut slope was allowed to dry before the second slurry unit of the same composition (minus the seed) was applied.  The purpose of the two applications was to assess the effectiveness and longevity of this method on surface soil stability, germination and seedling growth.  As can be seen in inset A and B, the hydromulch is still readily apparent on the soil surface and appears to still be effective as a ground cover.  Continued site monitoring will show the longevity of this method.  Seed mix was produced at Stone Nursery and comprised of Elymus glaucus (ELGL), Bromus laevipes (BRLA3), Festuca californica (FECA) Festuca idahoensis(FEID) and Eriophyllum lanatum (ERLA) plus mycorrhizae.

This was one of the first applications of hydromulch that was shot on the project and we were experimenting with several different slurry mixes.  This slurry unit used only 3 bags of Ecofiber and 1.5 bags Guardian.  Unlike the cutslopes discussed above, the surface of the soil did not appear to have a lot of stability.  The inset photograph shows the base of a grass seedling that has been “pedestaled” which means that the soil was eroded away from the base of the seedling during the winter rainstorms.  Future monitoring of soil surface stability might be to use “erosion pins” to determine the stability of the soil surface.  These are simply nails with washers hammered into the soil and they are used to measure any surface erosion that would occur over time.