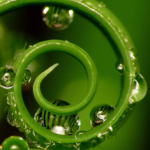 Biosol and Biosol Forte fertilizers alleviate iron nutrition deficiencies of the plants when the level of available iron is low.

In another trial in a vineyard it was observed that chlorosis (Iron deficiency) of grapes was reduced after fertilization with Biosol.

Iron is an essential micronutrient for plants. Deficiency of iron causes growth disorder (iron chlorosis for example). One of the reasons for iron deficiency is that the iron is fixed very strongly in the soil and is not available for the plants. Hydroxamate siderophores are able to change the structures where the iron is fixed. So the iron can be used by the plants. Hydroxamate siderophores are produced by micro-organisms (fungi or bacteria) in the soil.

In this study the researches tried to find out whether if it is possible to rise the content of hydroxamate siderophores in soil through fertilization. They tested Biosol, Bactosol, chicken dung and grape mark compost.
The results indicate that Biosol as well as Bactosol lead to remarkable higher concentrations of siderophores.

Dry mycelium was proved by this study, as well as other studies to behave as an efficient organic fertilizer.  Plant growth was enhanced several fold in treated plots compared to controls.